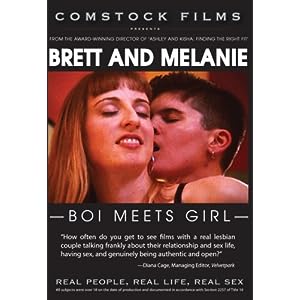 One of many "Real" movies from Comstock Films

Tony Comstock is a pornographer writer sailor father husband  filmmaker guy who cares about the state of sexual mores in our culture. And when I say cares, I mean more than just donating to Scarleteen and the NCSF and making movies about real people having real sex because they are really in love.

He is going to be putting his (literary) ass on the line:

“In late 2008 I began a deliberate campaign to take my ideas beyond the safe confines of my little corner of the internet. I began engaging on blogs and forums where I knew my films and the ideas they represent would be greeted with, at best, suspicion, if not outright hostility. This process has been hugely demanding — of my time, of my energy, of my emotions — with no guarantee that my efforts would ever bear fruit.”

But bear fruit it did. In fact, his writing (which is excellent in its own right) was noticed by none other than Atlantic columnist James Fallows. Which is why Tony Comstock will be covering for Fallows for the first half of February. Tony talks about what he plans to do with this suddenly huge soapbox:

By the end of the week, I hope to have laid out a case for the idea that while we live in an age where extremely graphic, often upsetting sexual imagery is but a mouse-click away, images that explore and celebrate love and sexuality in the same way that Valentine’s day celebrates love and sexuality are vanishingly rare.

“I am also going to talk about how law, custom, economics, and technology interact to enforce a wide gulf between the well-crafted, but oddly coy depictions of sexuality in mainstream film and television, and the poorly made, often cartoonishly vulgar depictions that seem to characterize the collision of sex and the moving image.

His sojourn as an Atlantic guest-blogger begins February 7 and runs through February 13, the day before Valentine’s day. I’ll certainly be following it, but I suspect that as a community of sex-positive writers and bloggers and freaks we should make sure to respectfully and openly support this foray into the mass media by one of our own.

One thought on “Tony Comstock, Portrait in Courage”