In the beginning of June Naiia and I are going to be co-facilitating part of a neat event at Fort Mason in San Francisco:

THIS IS WHAT I WANT festival is hosting an Unconference on pleasure, lineage and sustainability. Join us in this peer led space to collectively explore vital ideas about our various practices and activities through conversation, embodied enquiry and performative experiments. This unconference is a site of cross pollination between artists, activists and sexuality professionals, where we can dive deeply into issues pleasure, lineage and sustainability in our practices.

THIS IS WHAT I WANT is working thematically with ‘the line between private and public’ in 2016. 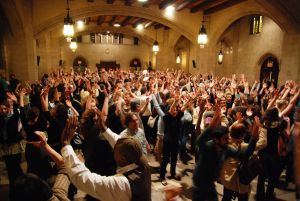 I’ve been part of the planning of this for over a month, now, but it’s ironic that recently I was drawn into a discussion online about “the ethics of rope bombing.” That particular act refers to doing bondage in public spaces, usually to capture an image or video but also often as a part of an impromptu stunt or street performance (and certainly it could be argued it is both).

I was deeply enmeshed in the argu – er, discussion when I forced myself to get back to work (on the festival) and I realized, suddenly, that my work and my social media were intertwined. Look at the first “current” issue that the Unconference suggests:

What does our practice look like if it is pleasure informed? What is the aesthetic experience of watching someone express desire if they expect to get what they want? Or not? How can our pleasure be relevant beyond our immediate private practices, on the broader stage?

Now, I can hardly be expected to be unbiased about this – even before I was involved in the kink realm I was strongly indoctrinated in the traditions of outsider art, street performance, and movements like The Theatre of the Oppressed. So it’s not surprising that I took issue with the people who suggested that rope bombing did not qualify as art, or if it did, it should conform to the norms of society (whatever those are and whatever that is) so as not to be discomforting or challenging to the audience.

And by “conform” they suggested things like only working within areas that you have secured performance permits for, or only performing in ways that won’t challenge the status quo. Is it legal to be topless? Don’t, because it might make someone think dirty sexy thoughts. Is it legal to tie? Well, make sure you leave hands free, and don’t give any suggestion of pain, power exchange, or danger, because it may trigger someone and besides, think of the children!

The original poster reframed her question, having tossed the golden apple of discord originally and, I believe, unintentionally. Rather than “ethical”, she asked if rope bombing should be “courteous and respectful.” The answer, like any other behavior, is of course “it depends.” But while she dismisses the idea that rope bondage can be art, most of the respondents who actually do rope bomb consider it their art. So what she’s really asking them, and me, is: “Should art be courteous and respectful?”

Personally, I think the answer is still “it depends” – but I also can show a long history of art that is now considered canon and pivotal that, at the time of its creation (and long afterwards) was discourteous, disrespectful, and vilified as contributing to the inevitable fall of civilization.

I’m looking forward to the Unconference, and I’m hoping we get to talk more about these things there. Some people rumored to be attending – the Pink Fork Mafia, Orpheus Black, Zahava Gris – are the kinds of pioneers that I have been inspired by, and I’m interested to see how they tackle these issues.

This page is where you get tickets, and I hope to see you there. Can’t make it? I’d still love to hear your thoughts below.