There’s a class I’ve been wanting to create for a while now – ever since I saw Rigger Cannon hook up a Prussik-type knot on a pole at an event. It occurred to me that it might be useful for strippers to have some fast bondage skills to play around with during their sets. Among other things, if you’re wearing rope then you are both naked and also have more places for the clients to tuck the dollar bills, yes?

Other sex workers – sexological body workers, escorts, pro-dommes – certainly could find some use for certain ties. It doesn’t have to be artistic kinbaku – a simple single-column tie can be used any number of ways. Most people want more of the fantasy than the reality of bondage, so a big “tie ’em up & fuck ’em” rope (that’s 15 ft of 5/8″ or bigger nylon, or 3m of 30mm or thicker for you civilized folks) would do just fine. Throw in a quick Texas Handcuff and you’ve got a tie that’s visually striking, easy to manage, and even somewhat effective.

I know there’s a market for it…I’ve given some training sessions to pro-dommes, and been the “designated rigger” in partnered sessions. I’ve also talked with friends who strip who seem enthusiastic about the possibility. They say that they’re always looking for that one gimmick that will capture the clientele’s attention, and bondage could be it.

I’m also sure that it’s possible – back when I was in a burlesque troupe, I remember hearing some people talk about how certain ties couldn’t possibly be tied in the amount of time given for a song. I proved that wrong time and again, and drew on my dance and stage training to also make it a bit more visually fun. Take a look, if you have a spare 1/2 hour or so, at my performance at the London Festival of the Art of Japanese Rope Bondage. 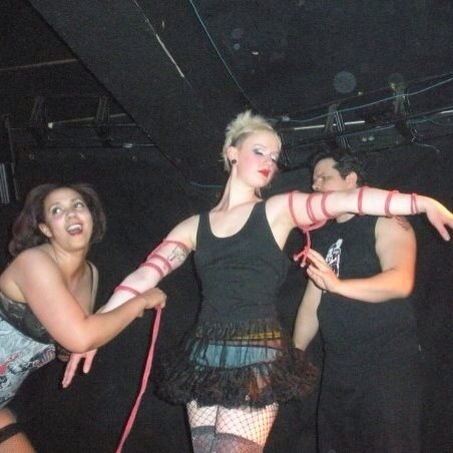 I also know that it can be taught – my partner and fellow performer at the time, Ms. Behavin, started out as my bottom, and then learned to tie and began using the techniques on other dancers. She came from zero rope experience and got to performance level, and was even able to do it, shall we say, “under the influence”.

Thing is, I’m not a client at a strip club. I can count the number of strip clubs I’ve actually been to on one hand. Ditto the number of sessions I’ve been part of (well, maybe two hands for that). But I come to it with rope skills already, so that when the moment comes to tie something I don’t have to break character and scratch my head and go “was this where the bight goes?”

I certainly don’t want to “mansplain” the class, offering a bunch of ties that I think the performers would need but that they actually can’t use. What I’d rather do is hear from my target audience – burlesque dancers, exotic dancers, escorts, body workers and pro-doms and subs – about what kind of “kink” their clients might be asking for. I’d like to hear what kind of safety concerns their environments include (time, space, etc). Ideally I would workshop it so that after learning some basic ties we could try the stuff out and give each other feedback on how to improve the performances.

What do you think? Are you in my target audience? Or are you a client of theirs? What kinds of feelings of bondage would you like to evoke during that kind of event?

2 thoughts on “Rope Bondage for Sex Performers and Workers”