Unfortunately, there is no magic money tree for kink conventions (or no one is sharing it), so organizers constantly have to (or at least should attempt to) balance accessibility, costs, and fair compensation. This creates a system where folks with the most disposable income & time (often white men) do the majority of presenting in the kink scene. It’s a shitty outcome of a flawed system, but it’s what we currently have to work with.- Boondoggle (quoted with permission)

Perhaps it’s my Irish nature, but when faced with a “shitty outcome of a flawed system”, my response is not to simply sit there accepting shitty outcomes. I either want to change the outcome, or fix the flaw, or get out of the system altogether. What I absolutely cannot accept is the idea that “that’s just the way things are, and there’s nothing we can do about it.”

Even if that’s true. I’m usually the guy who’s gonna break his head pounding against the wall. Which is why I get so frustrated by the idea that the current system of compensation for presenters at kink conventions can’t be improved.

Let me save you some reading, though: some people feel that If we can’t pay people what their worth, offering them less is insulting. If you feel that way, then go find something else, because this is not going to solve that problem. If, however, like me you feel that something is better than nothing – then read on!

Why I can talk about event finances at all: I have created my own.

Graydancer’s Ropetastic Unconference Extravaganza (more popularly known as the GRUE) as of this writing has had fifty-six incarnations in five countries over the past eight years with four more either scheduled or in the works. Most GRUEs end up putting money in my pocket, money in the hosting organization’s pocket, money donated to charity, and also money donated randomly to some presenter who meets the criteria of not attending the GRUE.

At the same time, GRUEs get overwhelmingly positive feedback and are among the cheapest kink events out there (usually costing $50-$75 per person). And that’s with lunch and pancakes provided.

On the other hand, I also am lousy with finances. I am wealthy in love, friendship, in having what I actually want, but money? It’s a huge struggle for me. No investing, no credit cards, I barely have a bank account. So what business do I have telling anyone anything about how to make money?

Well, none, except for that bit in the first paragraph: I found at least one way to make an event profitable. Yeah, you say, the event where you don’t have ANY presenters! True enough. Except there is that last part about the GRUEvy Award: we use the event with no presenters to raise money to give to presenters.

It could be argued that GRUEs are the most profitable for presenters, because they literally don’t have to do anything to get paid. The point, though, is: why can’t your group have a no-presenter event to raise funds to pay a presenter? What’s stopping you?

The First of Many Ideas

The argument I hear, over and over, goes something like this:

Because we don’t have the same resources as the professional conferences, we cannot provide compensation. That’s it! Why try? 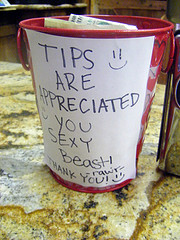 To paraphrase the Captain, what we have here is a failure to imaginate.

Idea one:  the way I do the GRUEs. But that is certainly not the best way. There are many more ways to raise a few hundred dollars to pay for presenters. Like:

There’s nine, and my non-financially-minded brain came up with them in less than two minutes. Any one of those would provide a small group with some funds outside of their normal operating expenses that they could use to pay presenters, or pay travel, or hotel, or whatever.

If you’re saying “but the members of our community wouldn’t pay for that” then frankly, you have a bigger problem in terms of entitlement and the expectation of getting something for nothing. There needs to be some educating going on about the value of knowledge and experience and people’s time.

There! Now you have the topic of your next meeting!

But Gray, That Won’t Work for Big Events

Will you be able to pay top presenters thousands of dollars, like they do in the tech/media/sports/whatever conventions? Probably not. But the idea of “We can’t pay them what they’re worth, so let’s pay them nothing” doesn’t make sense to me. In my experience the places that say “We can’t pay you as much as we’d like, but here’s something” make me feel much more valued than those who say “We can’t pay you.” Because I know that the real statement is: We don’t feel like paying you.

I don’t think they’re being malicious – they’re trying to put on a big event! That’s a complicated thing. It involves many, many meetings and paperwork and deposits and ticket sales and – I know, I’ve been on the staff for a few of these Big events.

There you go. A six-step plan that would take minimal administrative effort (most of which is already being done) and no extra cost to the event that results in a meritocratic system of compensation.

Would there be popularity contests that put certain people in big classes with little good content or shitty presentations? Sure. Would some people start to do really extreme stuff to try and draw a bigger crowd? Of course. How is that different than what’s happening now?

On the other hand, you have a way to encourage more presenters to become better as well as a way to let presenters know they aren’t doing well.

As I said, I am not a financial wizard. But it took me about five minutes to come up with that scenario while my lover was undressing me, and to the best of my knowledge, nobody’s tried it.  By all means, tell me all the reasons this wouldn’t work. I’ll listen.  And then I’d say “Try it anyway.” Because every new thing couldn’t possibly work until it did. I’m still told what a waste of time my GRUEs are by people who have never been to one.

I just smile and nod and prepare to go to Seattle for the next one.

Entirely possible. As long as we agree on the “whore” part and I get paid.

In all seriousness, I didn’t write this for me; I’ve got my “nut”, as Dov calls it, and after a decade of working on presenting I am pretty confident that the events I go to are getting good ROI.

I write this because when people talk about how bad presenters are, I agree, something needs to be changed. Part of that is presenting – and yes, there will be articles here about that as well. But the presenters are only one part of the ecosystem. There’s also the events, and there’s also the attendees.

You want better presenters? Create an environment good presenters would thrive in.

Seriously, folks: it’s not that we can’t figure it out. It’s that we (with some exceptions) are not even trying. I know there are better ideas than these. Can people with bigger brains than me give it a little thought?

* What, you find that humiliating? For who? Since when does “how to stick stuff in someone’s ass” have more dignity than playing Me & Julio on a streetcorner?

** Yes, you’d wear their T-shirt and pimp their product at your classes. Maybe record a promo for them to distribute to some podcast. Again, how is this is different than how things are already?