I was provided a free STDCheck 10-test panel by STDCheck (value: $200) in exchange for writing this review of the experience. There was no editorial control or expectations from the company in regards to its content.

That’s really the biggest problem with sexual health these days, in my opinion. More than behavior, more than research budgets, more than just about anything else, it’s the fear that someone – especially someone important to you – might find you “dirty” or worse if they found out that you have a sexually transmitted infection.

I suppose that would have to be my first criticism of the STDCheck service: they still use the acronym for “sexually transmitted disease” rather than “infection.” At the same time, it’s hard to keep up with what the kids call this sort of thing these days, and STD is a pretty easy way to understand what the service does.

It also helps fight the stigma by, well, completely sidestepping it. Aside from the general protections of HEPAA regulations and patient confidentiality, STDCheck goes a step further by not accepting health insurance – which means you won’t have the results of this test on your medical record. Not only that, their policy is:

When you purchase our testing, you are assigned a unique identification code (works in most locations) that allows you to visit the lab without giving your name or filling out any paperwork. (Accent added)

Now, I suppose one could argue for radical honesty, and say that we should all just be open with our records and that this kind of secrecy preserves the stigma – but that’s a privileged and able-ist perspective. Some of us can do that – I can, and you’re going to see my results by the end of this blog post. But I’m as out as out can be about my sexual behaviors, I don’t have a job that will fire me, increase my premiums, or any other social ramifications for sharing my status for various STIs.

Not only that, my partners all know about each other and are happy to talk about this subject, and all get tested regularly anyway. So I don’t have to fear the stigma, and that’s a very fortunate position to be in.

Services like STDCheck are needed because not everyone is that fortunate. But that does beg the next question: who should be tested?

Yep. I said it. Monogamous, single, even celibate, I believe everyone should get tested.

The reasoning is not because of the nightmare outlier scenarios like getting HIV from your dentist or even in the fact that most of the “sexually transmitted diseases” don’t require sex at all to be spread. It’s not even because those infections disproportionately endanger the lives of women more than men.

No, I say that everyone should get tested because of that first thing: stigma. I would like a world where someone can say “Hey, I’m taking a long lunch so I can go get myself checked out for STIs” (spoiler alert: the STDCheck process doesn’t take long enough to give you that excuse). I would like for a world where people don’t get disapproving looks from their physicians when they ask for the tests, and where it’s just a part of life, like flossing or having your blood pressure checked.

Also, right now, getting an anonymous test like this is pretty pricey: $200. Now, that’s about what you’d spend on a weekend kink event, or for a good corset, a rope kit, or a decent flogger. So while it’s not cheap, it’s also some pretty essential information to having an informed negotiation for your kinky scene, so it would be nice if people would treat it as such. The more that do, the cheaper it’ll be to provide the service. Everybody wins!

That’s what was explained to me when I got the code for my test with STDCheck. The email also contained a link to fill out a form with the purchase code, and as promised the paperwork did not have my name on it anywhere. As a person with a bit of a privacy fetish, I approved. I also already knew that as someone who had cold sores when I was a teenager, I would be likely to show positive for HSV (herpes) 1.

I live in Madison, WI which is a mid-sized university town in the Midwest, and there was a lab that could take my blood and urine about six miles away. The instructions said there was “no appointment necessary”, so I technically could have just printed it out and gotten into the car…but I wanted to give the system a chance to mess itself up, so I waited a weekend before heading to the testing lab.

It was located in an industrial area of town within another medical research facility (Madison has a lot of those, biotech is big here). This is where the only two ripples in an otherwise smooth experience happened – one my fault, one theirs.

The first ripple was in timing. I’m used to places being open all day long, but when I walked in, the receptionist noted that I was there for the lab work and informed me that I could buzz, but that the techs usually took lunch between noon and one. It was 12:15, so I resigned myself to the likelihood of a wait as I buzzed the buzzer.

Takeaway: check to make sure the lab you go to is open during lunch if you’re going at that time.

The second ripple was the fault of the lab doing the draws for STDCheck.com . Namely, the receptionist didn’t just say to buzz the buzzer; she also said “sign in.” There was a clipboard next to the buzzer with a pen and a long list of names.

So much for anonymity. Not only was I being expected to put my own name down, I could easily see everyone else who had been into the lab that day, and when.

Now to be fair, this was not STDCheck’s policy – it was the policy of the lab that contracted to do the sampling. Also, I was never asked for my ID, so I actually put your name down, just for fun.

Just kidding (maybe). The fact is, by the time I finished filling in the name on the sheet, a tech had come out to get me. Turned out she was having lunch in the office, and was willing to let me interrupt it. Two thumbs up for customer service!

And if I had more thumbs, I’d put them up as well for professionalism. I give blood pretty regularly, so I’ve had a lot of phlebotomic experiences, and she was one of the good ones. She scanned my test form, printed some labels, and drew three small vials of blood. Then she handed me a cup to pee in (along with an alcohol wipe to prevent the sample from being contaminated in case there was anything on the tip of my penis).

That was the last I saw of her; after I’d deposited the sample cup in the bathroom, I was able to just walk out. Elapsed time from when I parked my car to when I returned to it: about 5 minutes.

No judgement. No questions about my lifestyle. Just a professional attitude about the fact that they were going to be looking at some body fluids and telling me what they found.

You have the option to get results in a variety of ways, but I elected for email just to see how fast they might happen. Estimates were “as fast as two days” but my experience was the very next day. It was a simple email, letting me know that there was a message for me in my account at STDCheck.com.

Opening that message revealed this: 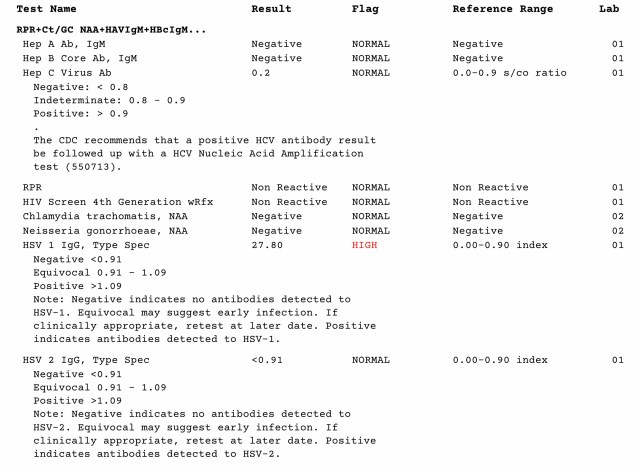 At first this seemed like a barrage of information, but my eyes were drawn pretty quickly to the “Result” and “Flag” columns, and the all-caps “NORMAL” and one “HIGH” communicated pretty clearly the results. Exactly as I had expected, I showed positive for the HSV-1 antibodies, which means I have herpes type 1, commonly known as “oral”.

This is a good example of why it’s a good idea to get tested. I haven’t had a cold sore since I was a teenager, and for a long time I never really associated the herpes virus with those at all. It would have been possible for someone to ask me “do you ever get herpes sores on your mouth?” And for my ignorant response to be “Nope, never!”

Does this mean that my partners should hesitate to kiss me? Without going too much into the details of transmission, no, not really. But then again, that’s mainly because:

HSV-1 is one of those “sexually transmitted infections” that don’t require sex at all. Again, it’s a bunch of sound and fury signifying nothing for most people (and yes, when I say “most people” I’m talking about those privileged enough to have auto-immune systems that can handle the minor infections). For some people, it’s a much higher risk with much more extensive consequences – and that’s why it’s important to know your status.

Taking the Next Steps

For me, the next step in the testing process was basically writing this post – my partners already know that I’m positive for HSV-1, and evaluate their risk accordingly.

But what if I hadn’t told them before? Or I hadn’t known about some of the results, and now I had to talk to them. In my case, I’m fortunate; I can have these conversations relatively easily.

Not everyone is that comfortable talking about it, though, and that’s why STDCheck provides one further service: anonymous notification of your partner that they should get tested. 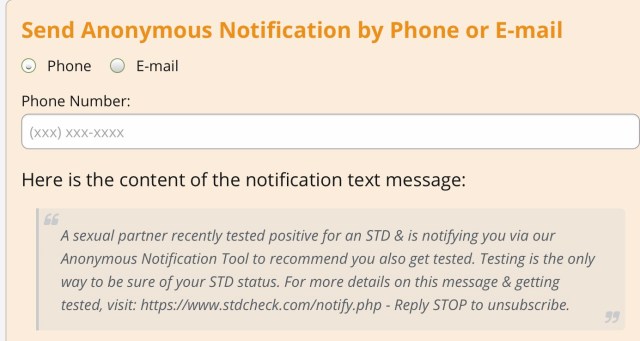 As far as I can tell, this tool was only available to me as someone who had been tested; when I logged out of my account and checked the site I couldn’t find access to it. That’s good, as it could be used as a tool of harassment if it were just freely available.

Again, this is an example of STDCheck balancing fighting the stigma of STI status with the reality of just getting checked. In an ideal world, it would be easy to call up your one-night-stand or fuckbuddy and say “Hey, turns out I have a bug I didn’t know about, you should get checked. Brunch Sunday?”

But the reality is, we all have our own level of comfort, and providing the anonymous notification balances that privacy with the needs of medical situations.

And beside, STDCheck then goes further towards fighting the stigma by contacting people like me who write about the experience of it with the real message:

It’s a big deal to get tested. It’s not a big deal what the results are – just make sure you know.