GRUE stands for Graydancers Ropetastic Unconference Extravaganza – a tongue-in-cheek reference to a monster from a geeky game called Zork from the early days of computing. The key word in the title is Unconference.

The a concept of the unconference (and what is known as open space technologies) came from the tech business fields, where some people noticed that while events might have one or two presenters who gave interesting topics, most of the really stimulating and constructive conversations were spur-of-the-moment pickup meetings between chance individuals who happened to chat during a coffee or meal break, or hang out in the hotel bar or lobby later.

They began to wonder if there could perhaps be a conference that was entirely made up of these kinds of moments, rather than a slate of presenters delivering sermons (often repeats) from on high. Instead, people could talk about and present to each other on what they were truly passionate about emright then/em, and help each other explore and grow with issues in ways that the traditional presenter/audience model didnt allow.

Social scientists came up with methods to facilitate this kind of Unconference. It is governed by 4 principles and 1 law:

A side note: For the very first GRUE in Madison I didnt think the final circle was necessary. The result was that the attendees – who were all close friends of mine – had the worst con drop theyd ever experienced. After doing four others, Ive learned that this is possibly the most important aspect of the GRUE, and this has been borne out by people like Lqqkout who have attended more than one GRUE.

The LAW OF TWO FEET

The law of two feet simply states: if you are neither benefiting from nor contributing to a conversation/presentation, take your two feet and go somewhere you can. This is with all respect to the presenter and other people, and there is no offense intended or taken. It simply means that people can make sure that they are doing something that means something to them, not have to sit around and be bored, waiting for some other presentation they want. There have been GRUEs where the presenters themselves have invoked the law, seeing something going on across the room and saying You know, thats more interesting than what I’m talking about. Lets go over there! And everyone laughs and it is great.

So how does it all work?

Friday night we have a meet greet, just hanging out, getting to know each other. This is to prevent the necessity the next day of things like ice breakers or introductions all around. People get to know each other during the day – time is too valuable to spend doing roll call like youre in elementary school. This is usually at whatever venue the local munch is, and usually isnt a play party of any kind.

Saturday the GRUE happens, starting (again) usually at 9. This may seem early, but there is a window of time we are creating and daylight waits for no one.

As people arrive, its my job to explain to them how the GRUE works (the principles and law above) as well as use the Open Space techniques to help the group come up with an agenda for the day. There is a specific set of steps to do this which I wont go into here, but suffice it to say it works. Here’s a quick illustration of everything taught at the GRUEs so far: 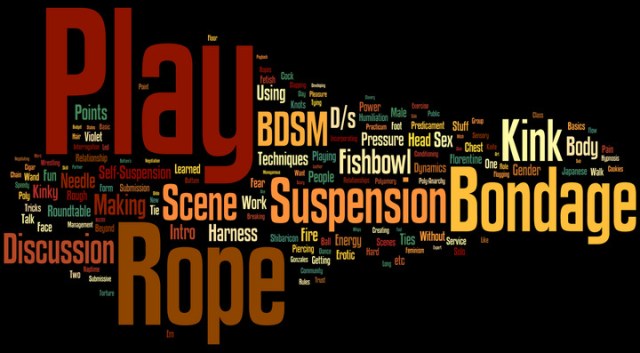 As you can see, theres a lot of stuff, ranging from the 101 level to weird shit no one would expect (Group Therapy for Humiliation Scenes is one that was surprising and very good). I also always offer my Fishbowl, which has been an amazing experience every time and which you can hear actually happen in Toronto on a Ropecast.

There is no lunch break. Time is too valuable to waste on breaking for lunch. Instead, food appears at the venue, buffet-style, and people are made aware that it is available when they want it. Usually they grab a sandwich or something and just keep on going with whatever was going on before they got hungry.

My job during the day is to keep things going smoothly – announcing classes as they occur, making sure people have the materials and space they need. Occasionally I present, but usually Im more a demo top – letting others present and just helping where I can. In a worst case scenario where no one had any ideas for presentations (which has emnever/em happened – usually its the opposite) I could certainly present on many different subjects, but usually Im more of the man behind the curtain.

At the end I gather people for a closing circle and we each tell something we gained/learned/felt during the GRUE. Again, in case you missed it before: THIS IS REALLY CRUCIAL FOR EVERYONE. I have had people skip it, and they always regret it, and I feel bad for putting them through an intense day and having them then basically suffer drop due to lack of group aftercare.

Then there is usually a dinner break – sometimes communal, sometimes everyone splitting – and we gather again about 9 or 10pm for a play party.

The next day, we try to find a home big enough to let me make pancakes for everyone, and have a brunch cool down where people relax, sometimes continue discussions/learning from the day before, but generally have an extended leavetaking.

So your job as a GRUE organizer is to come up with those three venues – the meet greet, the GRUE/play party, and the pancake breakfast. Then help publicize the event – easier now that thereve been five of them in two countries, but as you can see sometimes hard to really explain to people used to the traditional Con.

Once you get me there, I will make sure people get involved and that the event runs smoothly. You also have the experience of others in the GRUEp here at FetLife to draw on when figuring out how to plan and talk to people. Lily Aja from St. Louis, Nawa_G Lil J from Michigan, and The Control enthusiast from Toronto are all familiar with the logistics and can help answer questions I may not be able to.

If you dont feel a GRUE is right for your group at this time, no harm done – Ive got lots of classes available, and would love to present them (thats why I do this!). But I would love to see the GRUE happen in New Orleans, and hope that you choose to try it out. I can tell you that everyone else who has found it to be an immensely positive and community-building experience.

If you have any other questions, feel free to email graydancer@gmail.com  for more information and updates. There’s also a FetLife GRUE with veterans of past GRUEs sharing their experiences.